18F employees live all over the country. We work out of homes in Dayton and Tucson, St. Louis and Chapel Hill — and in federal buildings in San Francisco, Chicago, New York City, and Washington, D.C.

That means many of our project teams are also made up of distributed employees working all over the country. For example, you may have a developer in Austin, a designer in Washington, D.C., and a content strategist in Portland — but they’re all working on the same team and with the same partners.

Because we work on distributed teams so frequently, we’ve developed certain strategies for working well as a collaborative operation.

We have a “remote first” mindset.

We borrowed the term “remote first” from a presentation by GitHub’s Steve Smith, another company with many distributed teams. A “remote first” mindset means assuming that all of your coworkers are remote for the purposes of communication and collaboration. This means we:

We have a five-hour overlap in our workdays.

What this generally means, though, is that everyone on our team, no matter where they live, has at least 5 hours of overlap in their working hours: generally between 12 p.m. to 5 p.m. ET. As Michelle Hertzfeld, a designer in Tucson, notes: ”This covers the need for people to be in touch at least part of the day and won’t slow down ‘hot items,’ yet still allows people half the day to focus on actually moving the ball forward.” 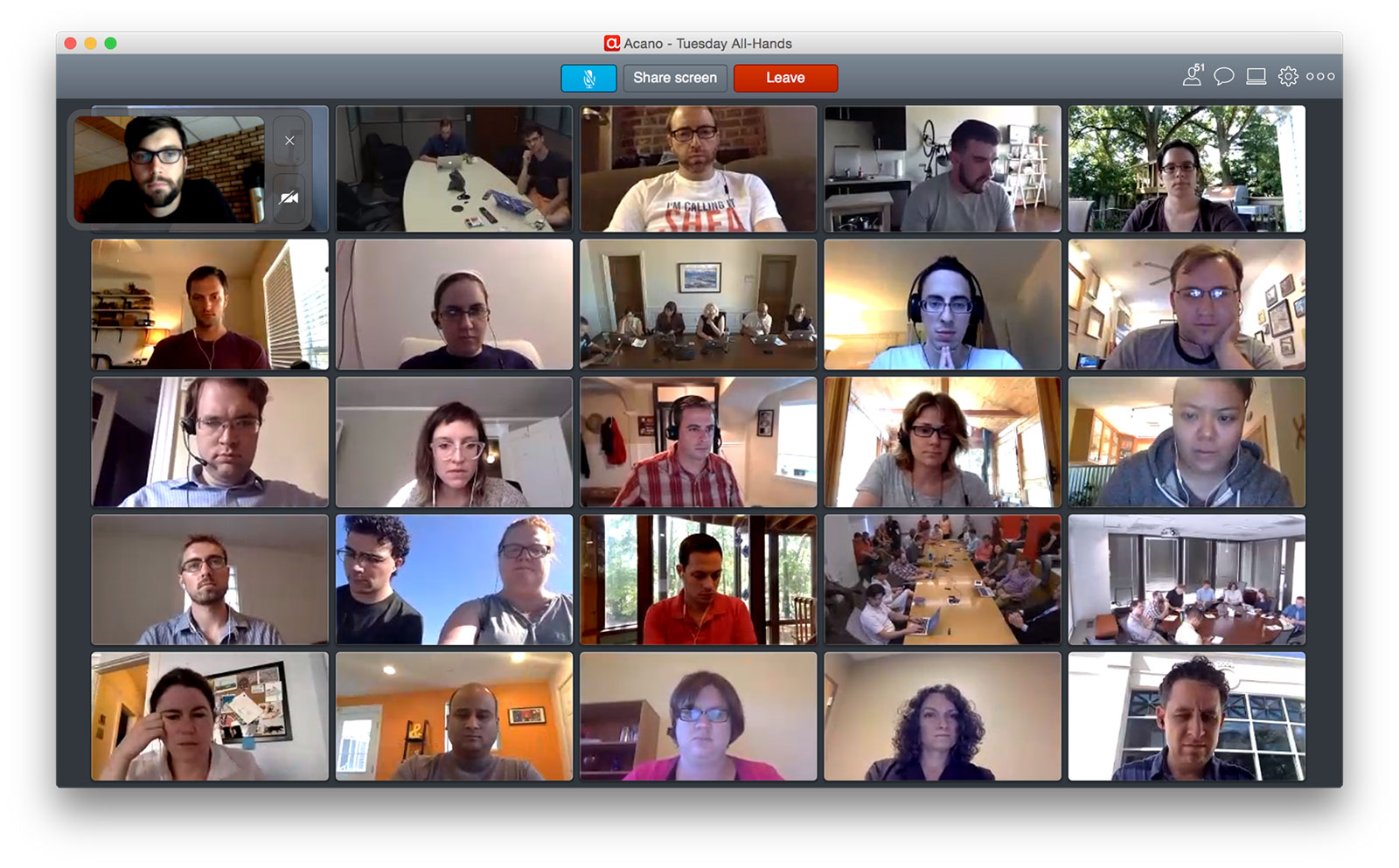 Part of the 18F team at the weekly all-hands meeting.

Have a question for a coworker? Two minutes later, we might be sharing a screen together, using programs such as appear.in, Google Hangouts, Screenhero, and plain-old screencasting. This allows us to ask for feedback, show off designs, and pair program with each other.

We have face-to-face meetings at least once a week.

All of our teams meet with each other face-to-face on a weekly basis, if not more frequently. We use high-quality microphones so that distributed teams can hear things clearly. Video allows us to communicate more expressively, and to give non-verbal cues like a thumbs up signal. It fosters stronger connections and helps us to be responsive to each other.

As Jacob Harris, a developer who works in D.C., puts it: “I think everybody here agrees that the most implausible science-fiction aspect of Star Wars is how smoothly all the Jedi videoconferencing works across the galaxy.”

So we also make contingency plans in case video or audio drops out — and even when it doesn’t. For example, in our weekly all-hands meeting, which everyone at 18F attends, we have video with sound, a phone option, and we transcribe everything in real time in a Slack room, so that remote participants (or people away from their desks) can keep up.

“A shared Google document with an agenda helps people to know what the meeting will be about in advance,” he says. “And anything that is discussed / decided in the meeting must be added to that document. Similarly, we request that any bugs or other coding work must be documented using GitHub’s mechanisms for issues, pull requests. This makes it easier to remember what we’re working on and keeps our actions public in case someone wasn’t able to hear what we were talking about.”

We make our work transparent to each other.

We’re committed to making all our work, discussions, and decisions available to everyone in the organization at all times. We do this by having:

We over-communicate, especially with clients.

We make sure clients are reassured of progress through regular delivery of drafts and versions. Team members are also very available (or at least, available regularly) via phone, emails and instant message so that clients can communicate with us on whatever platforms they use. We know we must work to keep clients involved so there is shared investment in the project and its outcome.

Internally, we often announce in Slack when we’re working from home, have a sick family member, or have a doctor’s appointment. This makes it easy for someone to track us down (or know when it’s better to reach out to a backup). Tadhg O’Higgins also had the idea this past summer to include our location or nearby airport code in our Slack handle — this makes it easy for new 18F team members to know what timezone someone else is in, and for veterans to keep track of people traveling away from their home timezone. No one made an official policy to include such locations, but the vast majority of the team adopted them organically — sometimes with creative tweaks like listing when they’re in transit (SFO > DC) or when they’re out of the office (OOO until 12 EST).

For this to work well, we all think of ourselves as remote employees, even if we’re in an office.

18F has employees in every time zone, but GSA itself also has a fantastic telework policy. Thus, even if we were all stationed in Washington, D.C, there would still be a need for our “remote first” mindset.

Jackie Kazil, a product lead who works in D.C., leads a team that has members based in San Francisco, Washington, and Raleigh-Durham. She says, “It’s important to make sure that two members who are co-located in the same space attend project meetings on their own computers when possible, because it’s great to see each individual’s face in a separate screen. (Though that’s not always possible.)”

We intentionally make sure that there’s not a cultural split, or a division between the “here” versus “there” team members. The entire team makes a commitment to the tools and processes mentioned above to make remote or part-remote work. It can’t just be the responsibility of those working remotely to be extra-engaged. Everyone needs to use the same process and commit to documenting work in the same way.

“It’s important to make sure that those in offices advocate for the interests of their remote counterparts because we don’t always know when something is up that needs advocating for,” says Becky Sweger, a developer who lives in Western Massachusetts. “For example, people who take notes in Slack [during meetings] or keep an eye out for questions [from remote team members] during the all hands really help out their remote colleagues.”

Some of us shift our time zones

Kate, who lives in Portland but frequently works an early shift, notes, “I’ve lately experimented with shifting my schedule to allow for more overlap with D.C. folks. Being fully remote, I value the ability to join project teams “in person” (via Hangouts), and starting to work a bit earlier than I did when I was in an office is one way I facilitate this. It’s worth noting a few things: The teams I work with are all very respectful of the time difference and try to schedule meetings during the core four-hour block we all share. Also, I’m a morning person by nature, so I like getting an early start and maximizing the most productive hours of my day.”

Why distributed teams are valuable

For many on the 18F team, working in this collaborative environment is second nature, but we understand that not everyone is used to working this way. Part of 18F’s mission is to show our partners across the federal government just how these tools can be used to maximum effect. Also, by having our distributed teams fully integrated into the workflow, we provide our partners a nearly 12-hour workday to spend on their projects.

If you have more questions on the tools we use and how we use them, just ask us at 18f@gsa.gov. 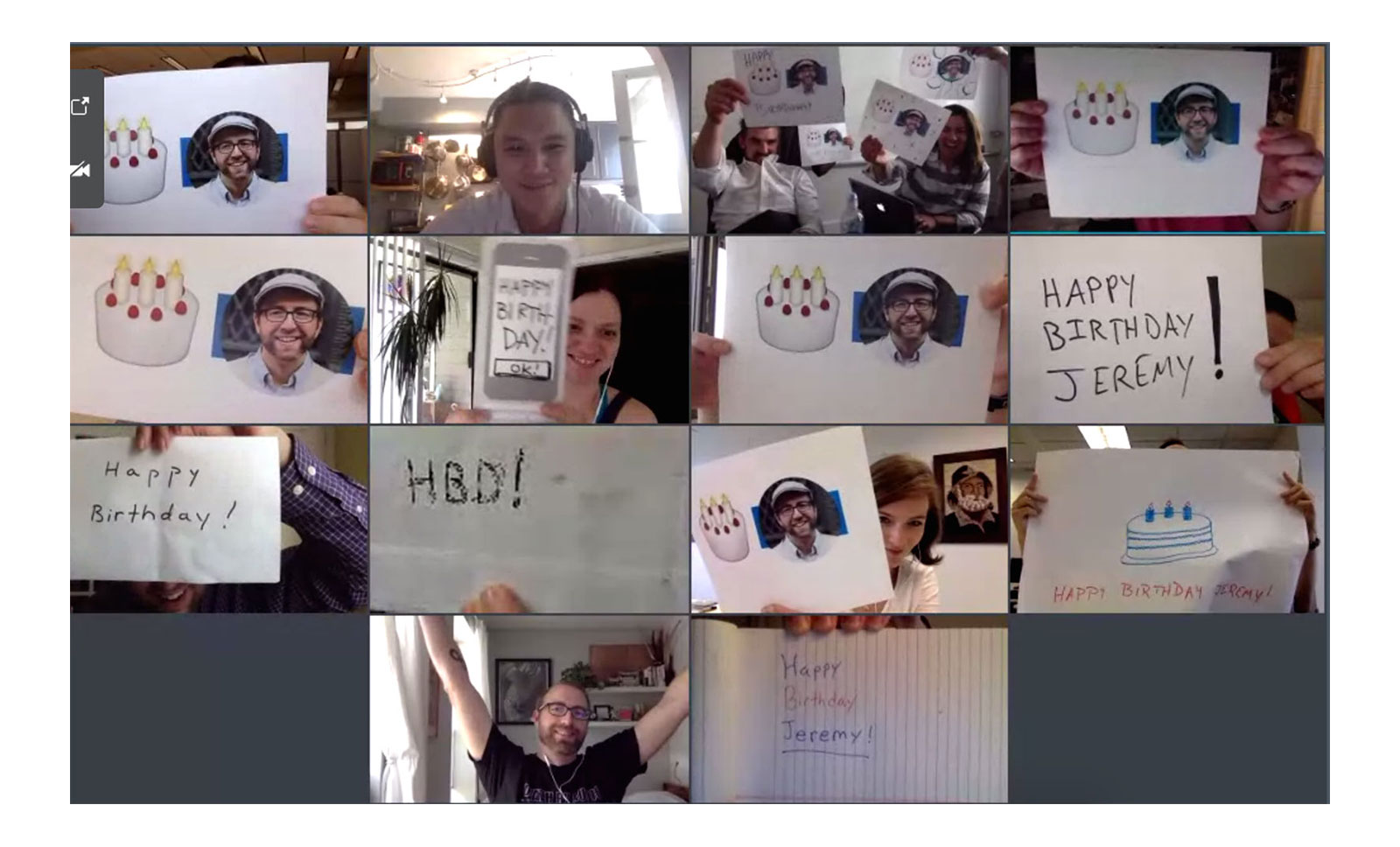 “What's in a name: Understanding and using government acronyms”