All throughout the summer, we’ll be profiling members across the 18F team. Bret Mogilefsky joined 18F in July of 2015 after a long and illustrious career at the game development firms LucasArts and PlayStation. He serves as the Product Lead for cloud.gov, a new platform that enables small federal teams to rapidly develop and deploy web services with best-practice, production-level security and scalability. 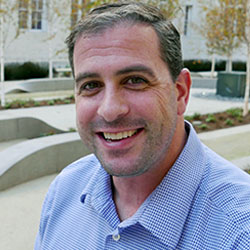 "It was the best way I could have an impact and do big good. I mean that in caps, DO BIG GOOD — I wanted to have the biggest possible impact in a good way."

Melody Kramer: Tell me about a bit about your path to 18F.

Bret Mogilefsky: I have a degree in Computer Science and Applied Mathematics from the University of California at Berkeley.

I spent most of my career working in the game development industry. I first worked at LucasArts, where I was the lead programmer and assistant designer of Grim Fandango, a beloved 1998 LucasArts adventure game, before migrating to the PlayStation team at Sony.

At PlayStation, I managed the developer services group and helped pioneer the use of web-based support for pro game developers. I also spent time in PlayStation’s R&D group, where I worked on non-photorealistic rendering techniques for the PlayStation 2.

I worked at the platform level, which means I worked on software, libraries, conferences, and support channels, but not on specific games. While there, my greatest achievement was putting developer experience at the top of the priority list for PlayStation 3. When it launched, developers really disliked it, and I started an advisory panel process to do user research about what it was like to develop on the platform, and brought that firsthand to the top of the company in Japan. Had we not done that, I think PlayStation 3 might have been a failed platform.

MK: That’s very different from the federal government. I’m wondering how you found out about 18F?

BM: I did pretty well at PlayStation. But I reached a point where I wasn’t necessarily learning. I had a career path moment where I hit my ceiling there, and had to decide whether to stay or leave, and what I wanted to do with the rest of my life.

During that time, I thought a lot about what was the most impact I could potentially have by staying. And fundamentally, it boiled down to making it easier and cheaper to make console games. And I thought maybe it was better to take the skills I had learned at PlayStation — I acquired an incredibly deep set of skills around practicing and scaling agile development while navigating and negotiating my way around a giant company — and use them in a place where it would have a bigger impact on the world.

I have always advocated for greater government transparency and action on major issues affecting U.S. citizens, but I always had to do this in the margins of my professional and personal life, and as just one person in a crowd. I started to think “What if my day job scratched the itch for impact?”

I started asking around and talking to people and looking at places where I thought I would be a good fit — and eventually ended up talking to two friends, one of whom had worked at Sony and later the Office of Science and Technology Policy, another who worked in game development before founding Code for America. And they told me about 18F.

I had never thought about working for the government, but after I learned about 18F, I couldn’t get it out of my head. I looked at all of the various offers I had and things I could do, and I kept coming back to 18F. It was the best way I could have an impact and do big good. I mean that in caps, DO BIG GOOD — I wanted to have the biggest possible impact in a good way.

18F enables me to apply my experience and natural love of agile methods to root causes that directly impact the effectiveness of government… as my day job! That is a unique and special thing. And I get to be home before my kids are asleep. They’re young, and it was very hard when I was a game developer to carve out time to see them. Now, I cook dinner most nights, and I see them, I can pick them up from school, I have a flexible schedule, and I have a job that mainly fits into normal hours. I’m ambitious, so sometimes it stretches, but I am dealing with fewer time zones in my work, and that makes it much nicer for me.

MK: You work on cloud.gov, a platform that will consolidate multiple government agencies’ IT operations activities in a single system that will improve the resiliency and security of agency applications. Can you tell me a little bit about that platform and what you do?

BM: I work on cloud.gov. It is a very good project for me because it fits my background around platforms and devops and supporting communities of technical people.

My ambition for cloud.gov is for it to act as a “force-multiplier” for the entire set of people working to improve government services, leaving them happier and more effective!

I use a metaphor of ships and shipyards to explain what cloud.gov is. Boat-builders don’t launch ships by backing a trailer down a boat ramp. Every boat they make is going to get launched, so they use a shipyard to make it as easy as possible to build right near the water and get it launched quickly and easily, even at battleship scale. cloud.gov is the shipyard.

There are over 4,000 pages of compliance policies you need to understand to be an expert on all of the requirements for launching a government service. There are new publications all of the time to stay on top of, to monitor changes — and all of this is provided as documentation, not tools.

Getting familiar with the entire checklist of compliance policies takes a lot of time, and there’s a lot of back-and-forth needed between developers, operations, and compliance experts to make stuff happen and get it shipped. The magic happens when an infrastructure team encapsulates their expertise, and then exposes that expertise as a service which can be used directly by developers. This is what’s known as “Platform-as-a-Service” (PaaS), and it’s a force-multiplier that bridges that gap between small service teams and advanced infrastructure skillsets, while keeping your headcount under control. 18F has built on the open source project Cloud Foundry to create our own PaaS, cloud.gov.

MK: What have been some of the challenges that you’ve faced while working at 18F?

BM: I had to learn how government approaches technology in traditional ways in order to think about how to best build cloud.gov. I’m constantly thinking “What does the product have to be in order to be appropriate for government? Why is it different?”

MK: Have you overcome any obstacles during the cloud.gov build?

BM: A few months ago, we were informed that the version of cloud.gov we had, which was running on AWS East/West, would not be considered for FedRAMP authorization unless it was on AWS GovCloud.

We developed for a long time without that key piece of info. Obtaining FedRAMP authorization is critical because agencies won’t adopt a new product without that key social proof. So we had to scramble to redeploy the entire platform, which involved automating everything about the deployment, and we did it in record time. We rallied and we managed a huge amount of complexity to get it done, and get it done on time.

MK: What has been most surprising to you about joining 18F and the federal government?

BM: I felt like I found my tribe. My whole life, I had been an open source advocate and user and a secret policy wonk. I found out I’m an impact junkie, and I found that 18F was filled with people like that. It’s really nice to be in a community of people who share things and are constantly learning and are really passionate about their work.

MK: I think a lot of people would envy your previous position in game development. What would you tell a former colleague at PlayStation who was interested in coming to 18F?

BM: Games are cool, and games are fun, but if you look at the arc of game history, games fundamentally fill the same role in society. Once you’ve been exposed to enough of that, you realize the actual impact of any individual game is less than what you could do by improving the government. Also, having kids made me think a lot more about the future and what comes after me and what will change. The world will get better or worse depending on what we do now, but games will mostly remain the same: entertainment.