This project was a collaboration between 18F and the U.S. Digital Service (USDS). The team was led by Mollie Ruskin (USDS) and Julia Elman (18F) and made up of designers and developers in both groups, including Maya Benari (18F), Carolyn Dew (18F), Victor Garcia (USDS), Angel Kittiyachavalit (USDS), Colin MacArthur (18F), and Marco Segreto (18F).

Joanne is a young Army Veteran who is looking to make use of her GI Bill Benefits and apply for federal student loans to attend college.

In trying to access the federal programs which will allow her to afford college, Joanne must navigate the websites of multiple agencies. She finds dozens of government websites which all seem relevant to what she’s looking for. Joanne is confused. Are these programs related to each other? Are they even all a part of the federal government? Are any of these a scam? When she tries to access the sites on the bus on her commute to work, she finds half of them are impossible to use on her phone. She’s overwhelmed by how hard these tools are to use, misses opportunities she’s eligible for, and feels frustrated and isolated.

Joanne is not alone. When the American people go online to access government services, they’re often met with confusing navigation systems, a cacophony of visual brands, and inconsistent interaction patterns.

Each button, a special snowflake. A snapshot of a quick survey of buttons across government websites.

Dedicated federal workers are striving to build helpful digital tools for people like Joanne. But our work happens in silos, under unique brands and programs. As a result, we spend a lot of time “reinventing the wheel” — recreating common patterns such as buttons, forms, and search bars — over and over again. At the end of the day, we’re creating poor user experiences, and wasting American taxpayer dollars in solving the same problems again and again.

Taking after a growing trend in the private sector, several federal agencies have begun creating design patterns and user interface (UI) toolkits to build unity within their own digital brand. Some shining examples include those of the Consumer Financial Protection Bureau (CFPB), US Patent and Trademark Office (USPTO), and Healthcare.gov.

This is a time-intensive endeavor, and not all agencies have the resources to support it. To best serve users like Joanne, we need to set a new bar for simplicity and consistency across government services, not just within a given agency or program.

The question in front of us became: Is it possible to create a shared set of tools to provide consistent, beautiful, and easy-to-use government websites? 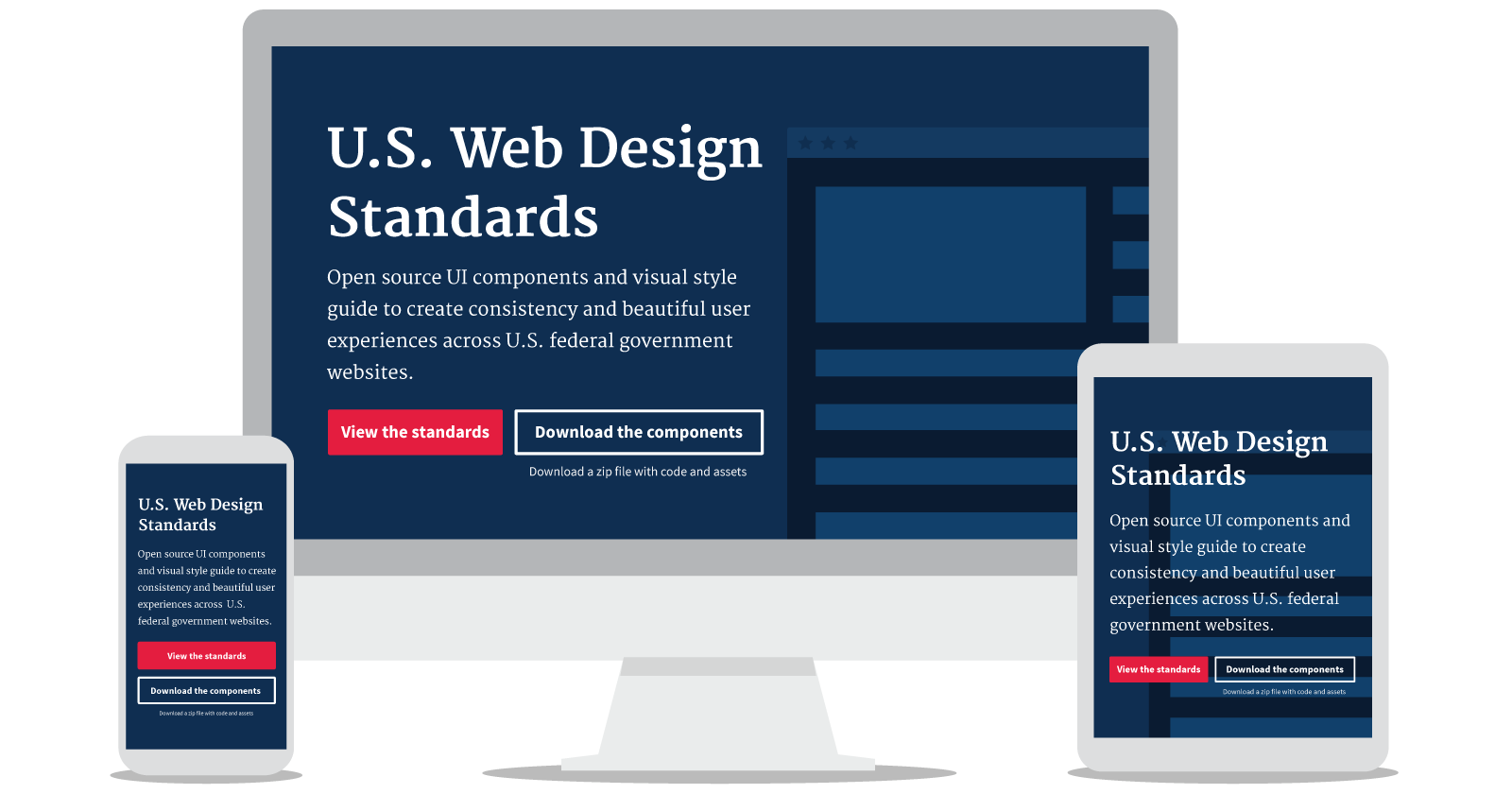 The U.S. Web Design Standards are designed to be viewed on any device.

The U.S. Web Design Standards are the U.S. government’s very own set of common UI components and visual styles for websites. It’s a resource designed to make things easier for government designers and developers, while raising the bar on what the American people can expect from their digital experiences.

In the Web Design Standards, you will find:

In creating these tools, we set out to accomplish four goals:

What began as an idea turned into four months of rapid development and iteration by a collaborative team at 18F and the U.S. Digital Service, under the guidance of an advisory board of talented, experienced government workers in the CFPB, the Food and Drug Administration, the Department of Veterans Affairs, the Social Security Administration, the Department of Education, the Internal Revenue Service, and the GSA.

As with all 18F and U.S. Digital Service projects, we’re working in the open to create a resource that everyone can own and contribute to. We’ve taken an iterative, user-centered approach to ensure we’re addressing the needs of our users as well as government designers and developers. A cross-functional team of UX, front-end, and visual designers each played a key role in this process: 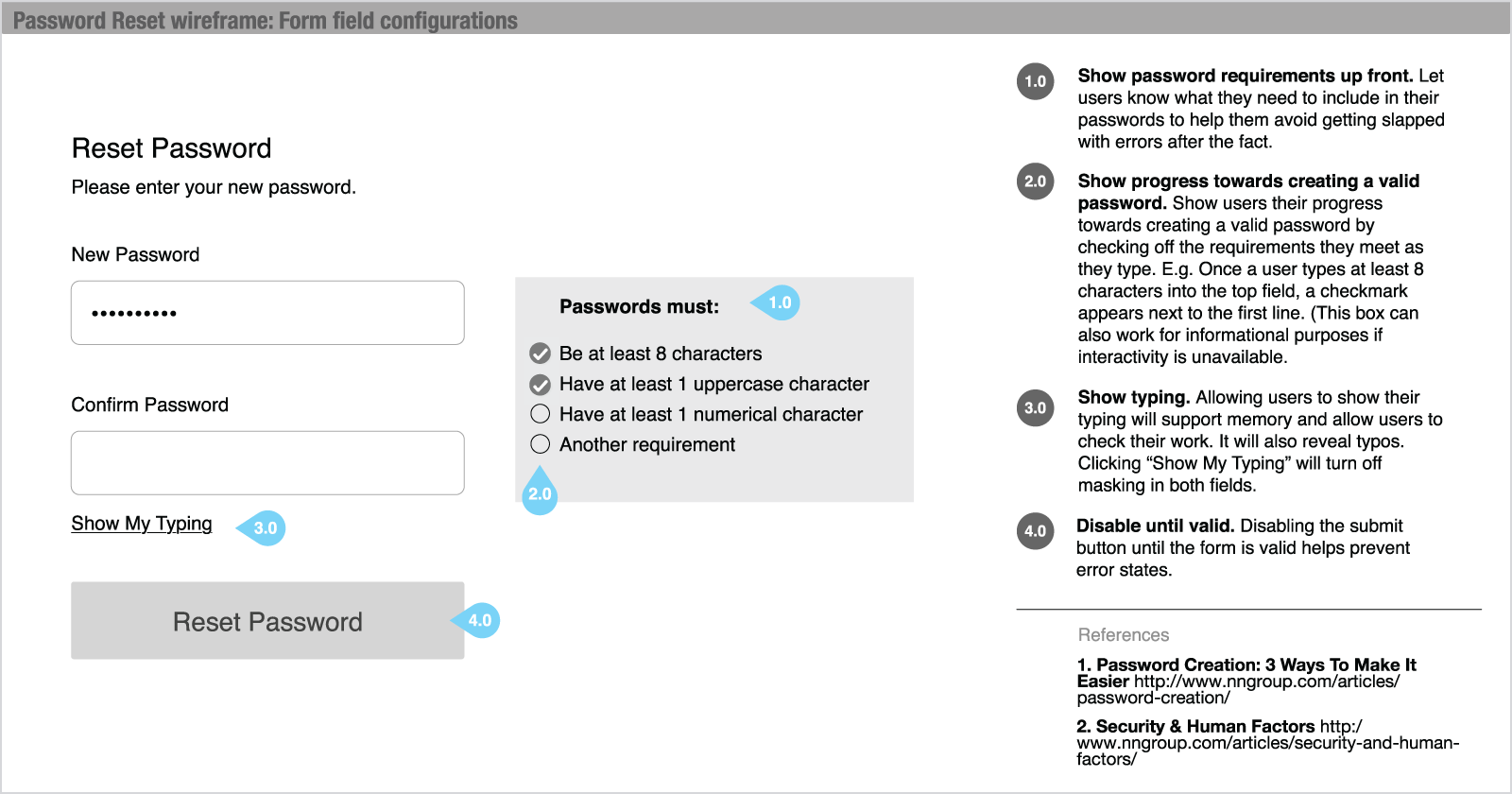 “Making the best thing the easiest thing” starts with making the standards website itself easy to use. With every iteration of this product, we conducted numerous interviews, usability tests, and card sorts with designers and developers across government. Everything from the site’s organization scheme to its code snippets and download buttons are informed by user research.

The design of every component follows data-informed best practices, found both inside (DigitalGov) and outside (Nielsen Norman group articles) of government. Many components were derived from other agency and style guide patterns; more complex patterns were further tested with end users.

We believe agencies should still usability test everything they build, but following the standards will help everyone avoid common pitfalls. 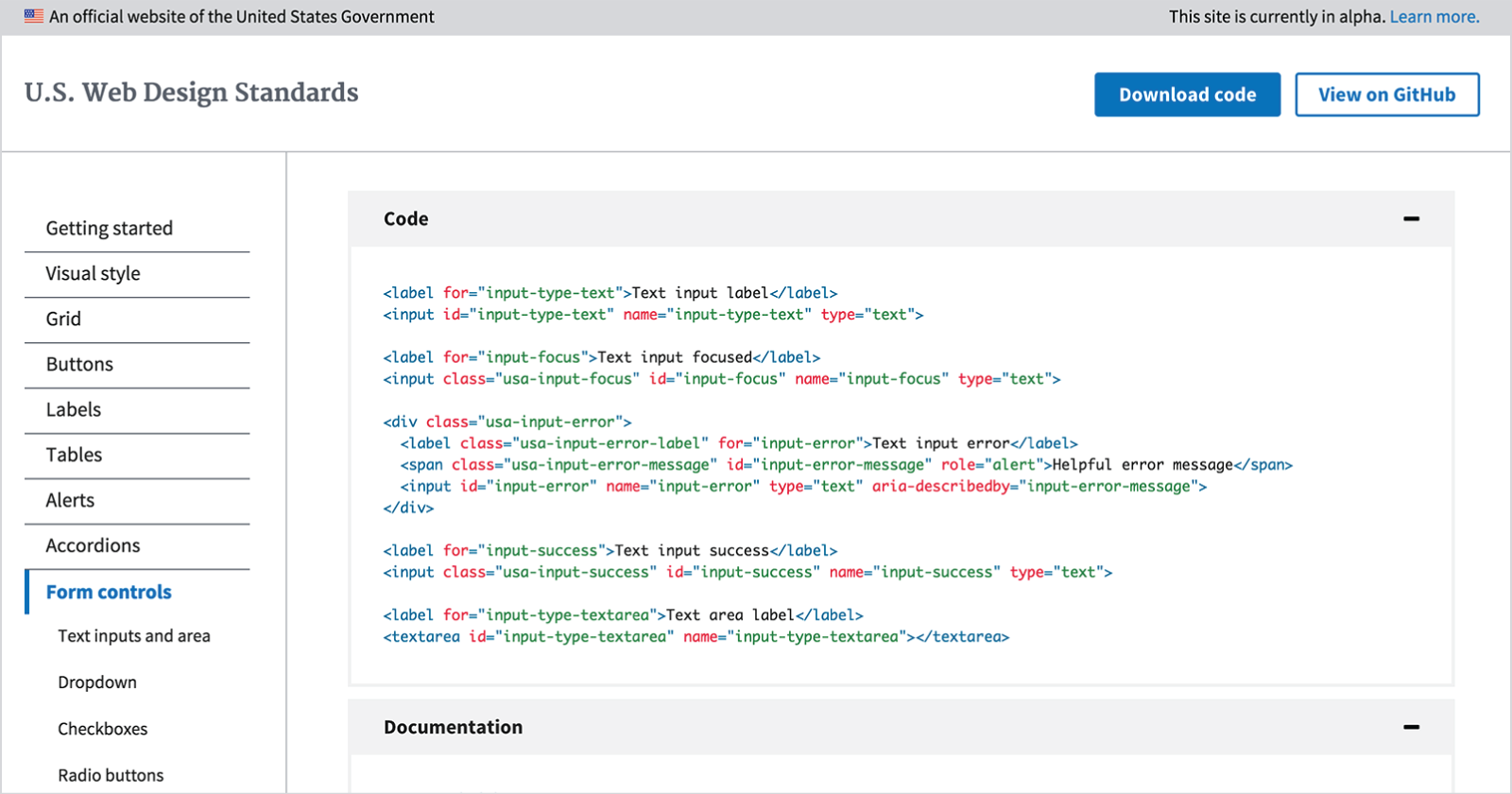 All of our standards include code samples.

We wanted to create a single reference point for developers in need of common patterns, providing the building blocks of code for teams to assemble websites. Our goal was to build a system of components shaped by modern best practices in front-end development and government accessibility standards.

We built the UI components on a solid HTML foundation, progressively enhanced to provide core experiences across browsers. All of the code is 508 compliant, so it’s accessible to everyone. Our styles are written with Sass and can be used as a Sass library or included directly as compiled CSS. In order to make sure our code was easy to read and easy to pick up, it had to look like it was written from a single voice. After speaking with dozens of front-end developers and designers in government, we sought to strike a balance between modular CSS and code that’s clean and easy-to-use. 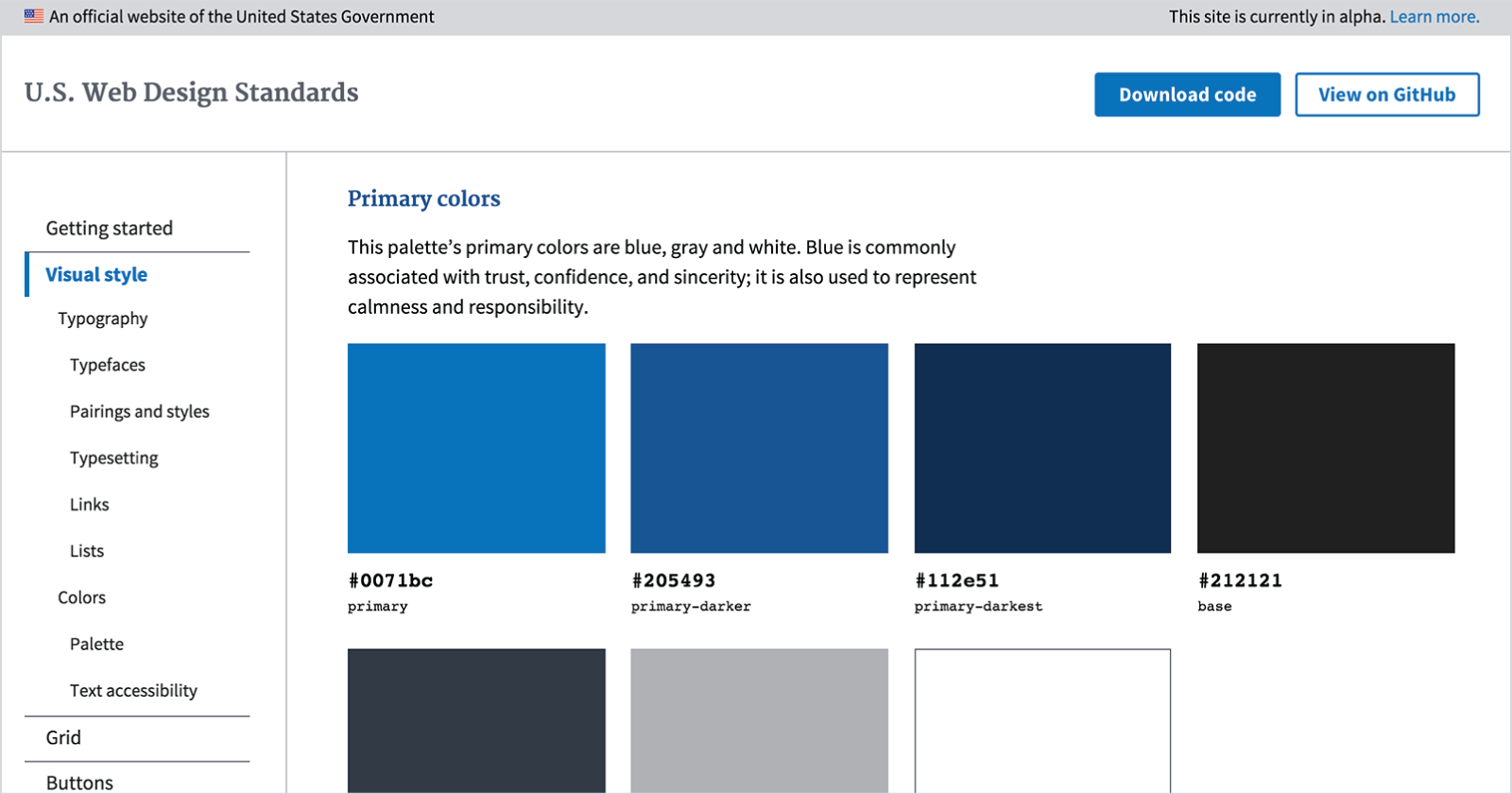 The Design Standards include an extensive color palette.

We set out to create a single common visual style to apply flexibly on a broad range of government platforms. We wanted a clean, modern aesthetic that communicates credibility, trust, and warmth and meets high standards of visual accessibility.

We conducted a branding exercise, auditing dozens of government websites, logos, and brand styles. We tested dozens of typefaces, with a laser focus on open source and highly-legible pairings. The font suite we selected — a sturdy serif and slender sans serif — meet a range of layout needs, from polished marketing pages to content-heavy digital services. We landed on a palette of blue, gray, white, and red that can be applied generously or sparingly to create a distinctly American flavor with adaptability baked in.

We’re just getting started…and we need you!

Like any true alpha, this is a living product; we will continue to test our decisions and assumptions with real-world feedback as it develops and evolves. We encourage you to explore the U.S. Web Design Standards, contribute your own code and ideas, and leave feedback on GitHub. We will use your input to improve the standards and make regular releases in the coming weeks and months.

Check out the U.S. Web Design Standards and let us know what you think!

This project was a major feat of collaboration. We’d probably still be off in a corner designing buttons if it hadn’t been for the encouragement, feedback, and support of this incredible group of people both inside and outside of government.

A special shout out to Julia Elman for her hard work in getting this thing off the ground and to John Yuda for seeing us through to the end. And thanks to Code for America’s Norris Hung and Frances Berriman for their contributions to this project.