At 18F Consulting, we experiment with ways to empower agencies to build cost-efficient, excellent digital solutions. Recently we partnered with the Department of Labor’s Wage and Hour Division (WHD) to run a two day “Design/Dev Agile Sprint.”

The Department of Labor’s Wage and Hour Division is responsible for enforcing a wide variety of federal labor laws, including those requiring the minimum wage, overtime, child labor protections, and family and medical leave laws. Over 1,000 investigators, working out of local offices nationwide, and often literally in the field, investigate employers to determine compliance with these laws. To gather the information they need, they travel to a wide variety of businesses, including farms, restaurants, hotels, retail shops, construction sites, hospitals, and many others.

While conducting investigations, Labor employees often turn to the Field Operations Handbook (what they call the FOH) for guidance. The handbook is an operations manual that provides interpretations of the law, procedures for conducting investigations, and general administrative guidance. It reflects policies established through changes in legislation, regulations, significant court decisions, and the decisions and opinions of the WHD Administrator. The handbook is a critical tool for WHD staff.

How might we help DOL’s Wage Hour Division move forward with a quick win that would demonstrate what modernization can mean in a meaningful, iterative way?

Two investigators (left and right) and an 18F user researcher (center) who is shadowing them to understand how investigators use paper and digital methods to accomplish their job.

The current landscape: Publishing in the 21st century

The handbook consists of four five-inch-thick binders containing printed and photocopied pages. These binders are replicated and distributed across numerous regional and local offices. The handbook also exists as online PDFs, where each chapter or subsection is published as its own PDF. With these two options, investigators don’t have an easy way to quickly access and search for much-needed information that helps them complete investigations, particularly when they’re working out in the field. 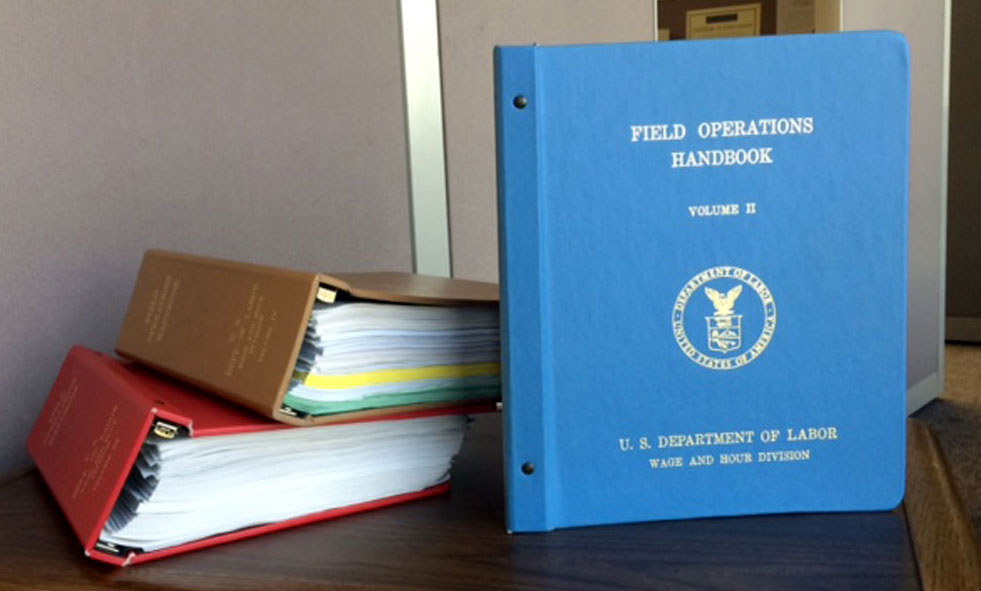 The challenge: How to move this project forward?

The division’s modernization team wanted to bring the handbook into the 21st century by placing it online and providing robust search capabilities. This was not a radical idea.

Departments across the federal government often operate under three constraints that can make these projects a challenge:

18F Consulting is already working with the division’s modernization team on a much larger effort — the incremental modernization of an aging management and investigation system. While that was underway, we wondered, “How might we help the division move forward with a quick win that would demonstrate what modernization can mean in a meaningful, iterative way?” With the guidance of Tom Giancola, a WHD investigator, and other WHD stakeholders, we chose to build a proof of concept for modernizing the handbook.

At 18F Consulting, “Prove by doing” is our motto.

The proof of concept sprint: From design to prototype in days, not months

In this two day sprint, about eight of us gathered to:

We facilitated a two-hour kick-off meeting (sometimes called an Inception). It got the group aligned around the problem and to agree on a plan moving forward.

During this Inception we:

The designer, developers, product owner, and investigators (our primary users) hunkered down in a work room to make the first-ever, living, modern digital version of the Field Operations Handbook (FOH)!

We created an ad hoc project board to track: Backlog, Current, In Testing/Review, Finished. We used sticky notes to write user stories and the wall of our workspace to place the sticky note in the correct column as it progressed. This helped the group understand our priorities for the two days we had and to know at any time the work in progress.

Examples of our user stories:

Day 2 of the team working out of the 18F common space. Developers on the left. Investigators (users) and product owners talking about needs on the right. Taped to the windows are the progress boards (Backlog, Current, Done).

Tom, the product owner had already used optical character recognition (OCR) software to convert 100s of PDFs into MS Word documents. Microsoft styles and headings were applied to the content to begin to structure the data. (Aside: this is a perfect example of using the tools you know best to move a project forward!) With that in hand, our developer validated the technical feasibility of converting those Word documents to HTML pages that could be searched using Elasticsearch.

By the end of Tuesday we had:

Coming into the sprint, we understood that one of the major constraints is that the handbook is created and maintained using Microsoft Word. Minimizing the effect on workflow was therefore a key part of any proposed technical solution. Fortunately, there are several open-source, publicly available tools that allow for automated conversion from Word files (.docx) into web-friendly files (.html), including pandoc. So, first, we wrote a script that uses pandoc to automatically convert the Word files to HTML files.

Then, to get the HTML files to be more usable, we wrote a second script that extracts the content from the HTML file, does some high-level parsing, creates a Table of Contents, establishes JSON objects for each part of the Chapter (along with associated metadata), loads the JSON objects into an Elasticsearch service, and rewrites each HTML file to include links to other government sources and internal links. Finally, the files and search results were served using NGINX as the application server (later, this was rewritten to work with Apache).

"...we made so much progress in a short period of time! It’s searchable and you can actually read it." —Amy, Senior Advisor, Immigration and Farm Labor Branch

One of the great things about a cross-functional team in the same room for a sprint is you can use faster design tools. Instead of creating pixel perfect “mockups” of how navigation might work, or how a page might visually feel, we did quick pen sketches on paper, a rough color scheme in Illustrator and then went right into design and developer pairing. We discussed problems and opportunities on the spot and were empowered to move forward with our ideas.

Actual investigators made this sprint a success. Working with them over the two days, we determined the best interface copy that would be clear and actionable to their peers. Seconds after code was pushed to the staging site, we observed how they used search and understood the search results pages. Feedback was immediately incorporated.

Two days later we had a working prototype showing browsable chapters and a search results page.

For many of us in the design and software development profession, building a working prototype is not a big deal. For the dedicated civil servants in the federal government, it can be. Over these two days we demonstrated that with the right support and the right people in the room, ideas can be tested, iterated upon, and realized without months of requirements gathering, large waterfall contractual agreements, and other impediments.

This prototype, built over a two-day sprint, is still an internal proof of concept for the people responsible for improving the FOH. For important legal reasons, they are dedicated to ensuring the confidential, internal-facing guidelines are developed in a secure, yet accessible way. Our prototype used the public-facing portion of their guidelines to reduce that risk. In the next few months, they will pilot this with a few regions while they work on securing a development environment that can house the more useful internal-facing documents (helping government do that better is another story for another day). Meanwhile, for all future discussions, they have a working prototype, created with internal stakeholders in the room who helped build it!

18F and GSA are committed to being proactive federal partners and providing operational excellence wherever we can. By working hand-in-hand with the WHD team, we’ve been able to show them what’s possible, and have given them the basic knowledge to ask the right questions to help them develop solutions in a cost-effective, user-centered way.

If your agency has a project you’d like us to look at, please contact 18F Consulting at inquiries18F@gsa.gov.

“Behind the scenes: Building a new College Scorecard with students”