Shortly after joining 18F Consulting, the opportunity to work on a Department of the Treasury project came my way. I didn’t stop smiling for what seemed like an hour (or three) after I found out the scope: Treasury was putting a woman on the $10 bill! Through a quick series of emails and phone calls, the Treasury team briefed us on the project logistics, including that it would feature a woman, have enhanced security, and contain a tactile feature.

We agreed to partner on their digital strategy around the redesign of the $10 bill, consulting on content and visual design for the website and helping shape the social media rollout. We went about creating our statement of work (SOW) and completed the Interagency Agreement (IAA), which gives us permission to work with another agency, since 18F operates under a cost-recoverable model.

Then the fun really began. 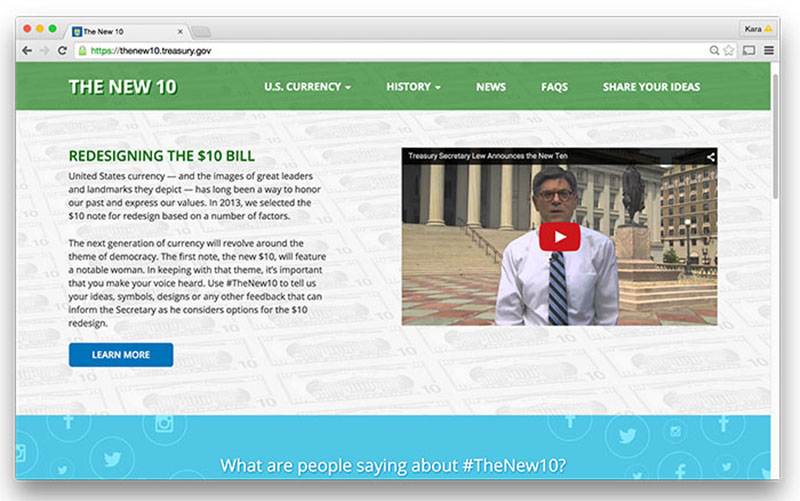 We set up a number of creative reviews with 18F Consulting and Treasury’s design team. My colleague Jesse Taggert and I partnered closely with Clare Kim, Jonathan Webb, and the team at Treasury. We began by grounding ourselves in the project history to gain perspective, then asked who would be visiting the site and their objectives in order to gain empathy for the site’s customers. After all, we approach our digital work from human centered design perspective, a creative approach to problem solving that starts with the people you’re designing for and ends with new solutions that are tailor made to suit their needs.

Our goal was to ensure #TheNew10 website made it easy to understand the news quickly, get folks to the information they wanted, and had a clear call to action for people to share their thoughts on “the new 10.” Since Treasury wanted to encourage the public to weigh in on who should appear on the $10 bill, and what democracy means to them (the theme of the new bill and next set of bills), we also provided advice on methods and approaches to maximize the general public’s interaction with the campaign. Other topics covered during our creative reviews included information architecture, search engine optimization, visual design, interaction design, and how to process feedback from the public and stakeholders.

We roped in Elaine Kamlley from our outreach team to help do an outside evaluation of a few launch day scenarios for the group and help them anticipate possible reactions in social media.

Secy Lew will choose a woman who was a champion for democracy in the U.S. on the redesigned $10 note. #TheNew10 http://t.co/NtwytsvHxC

The hardest part of the engagement? Keeping the secret from my friends and family! The second I got clearance from Clare that Treasury had announced the news, I tweeted:

Right on the money: @USTreasury putting a woman on our currency! https://t.co/ZCCri7o4NY #TheNew10 pic.twitter.com/7ZIXNtW08N

What an honor to play a small part in this historic U.S. Treasury initiative. If your agency would also be interested in working together on your digital strategy, send our consulting team an email at inquiries18F@gsa.gov.

“An introduction to HTTPS, by 18F and DigitalGov University”