Folksonomy and infocloud — language innovations of Thomas Vander Wal — haven’t yet reached Shakespearean fame, but they’re shaping up to be major players in the world of technology. And last week Vander Wal chatted about these concepts, and a few others, as a speaker for an 18F Design Presents event.

The information architect’s Friday discussion highlighted his research into social, internal collaboration in the workspace. While “water cooler conversations” fostered knowledge sharing in the past, digital platforms like email and Microsoft Lync have allowed employees in modern offices to share information and generate ideas.

“This idea of having hallways with memory was absolutely brilliant,” Vander Wal said during his lecture. But many companies don’t save instant message conversations. And email buries data in an archive that’s inaccessible to most. 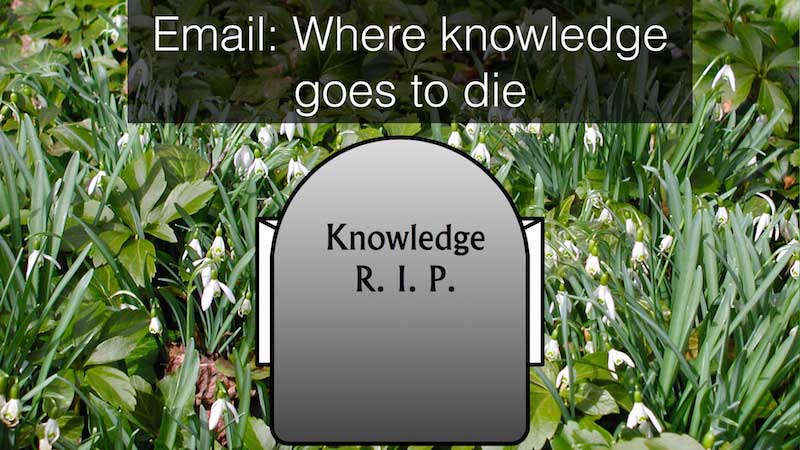 An illustration of closed-node communication, from Vander Wal’s presentation

“Email is essentially where knowledge goes to die,” Vander Wal said. “Think of it as a tombstone.”

Closed-node communication, like email, is slow to spread and slow to change. By contrast, open digital interaction is adaptable and shareable. Slack and other similar tools allow users to ask questions and collaborate via instant message in a variety of open channels. Those messages are archived, and all users can search them, “which is insanely valuable,” Vander Wal said.

We’ve certainly found this to be true at 18F, and we’ve blogged before about the value of documentation when training new hires. We emphasize open, digital record keeping, and — whenever possible — we illuminate our processes, hopefully to the benefit of the larger tech community. 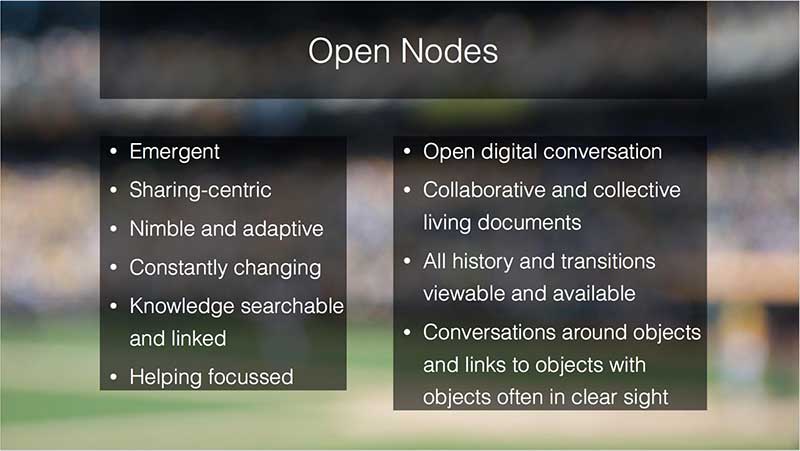 Alongside his cutting-edge ideas, Vander Wal is known as a liberator of data. One of his pivotal career contributions was making vast swaths of Department of Transportation information searchable, a task previously deemed impossible.

Vander Wal rounded out his Friday talk with a discussion about choosing the right social tools for work.

“One size does not fit all,” he said. Many groups use three or four different platforms, each with different features and functionality. And companies must keep in mind that employees may not immediately embrace this workplace sharing.

Our culture is not openly social as a norm, Vander Wal said. In spaces with permeable walls, people need to be allowed to make mistakes and openly share.

Watch the entire lecture here. Tweet Vander Wal at @infocloud. And keep an eye out for more 18F speaker events, resuming this August.