Designer Dan Brown was driving through downtown D.C. when he received a nasty client voicemail. New to the city and in his mid-20s, Brown was juggling multiple projects for the first time.

When Brown reached out, the client vented. After that, something surprising happened. Everything was fine; the client just wanted to be heard. This was a small moment, but it stuck with Brown.

Over the course of his career, Brown has established himself as an authority in design conflict and resolution. On Friday, he gave a talk at 18F. “Stop fighting, start designing,” centered around the design process and inherent conflict therein.

“Design is conflict,” Brown has said.

Brown, an information architect, has worked in the district for large swaths of his career, both in private industry and the federal government, both from his own home and in a dark, windowless office. Most recently, Brown co-founded EightShapes, a design firm with clients like Yahoo! and Marriott International. Across projects and situations, Brown noticed many of the same conflicts cropping up.

He opened his lecture by listing common issues and stakeholder quotes. For example, “Things have changed since we last spoke.”

Brown asked who in the audience had been told that before. After a moment, a majority raised their hands. Conflict is a mechanism for positive change, Brown explained. It’s a process, even though it feels negative at times.

The designer and author of two books used his interactive game, “Surviving Design Projects,” to frame sections of his afternoon lecture. The game is a set of playing cards, which break conflict resolution into three parts: situations, patterns, and traits.

During his talk, Brown asked audience members to draw “situation” cards from the deck before discussing “pattern” card solutions. For example, a distracted stakeholder fixates on an interesting but irrelevant website for inspiration.

“I call it distracted by shiny objects,” Brown said, waving a laser pointer around the room.

The pattern cards offer techniques for unsticking situations. For example, “make a plan,” or “offer a sneak peek.” 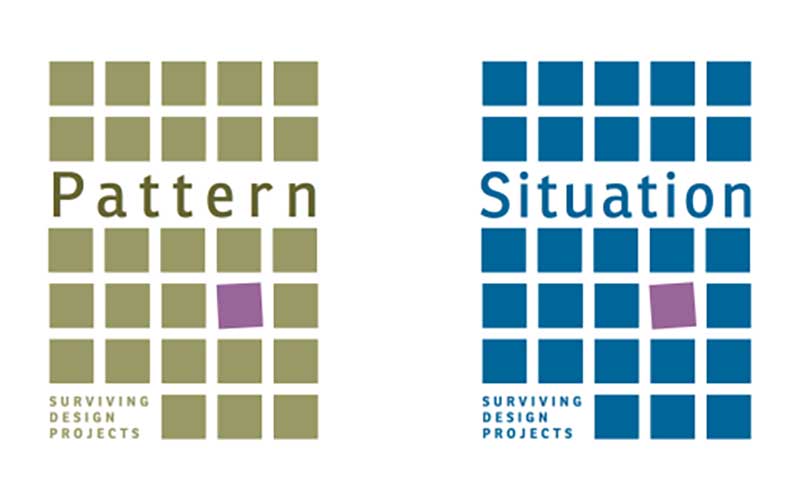 The third piece of the puzzle, “trait” cards, are useful for self-reflection and understanding characteristics. “Dogmatism,” for example, can predict conflicts and the techniques that best resolve them.

Brown asserted that no single, “right” solution exists; often the best technique reaches outside comfort zones. He recounted a half-day workshop where one participant used the same “pattern” for every issue. The unvaried response led to an entirely new subset of conflict.

“You may look at some of the patterns and say, ‘I would not do that in a million years,’” Brown said, but emphasized that experimentation can move conflict in a new direction.

Brown challenged the audience to push themselves, to work toward shared understanding, even if the process is frustrating or tense. And self-reflection, he said, is invaluable.

“The crux of collaboration is understanding where you fit in, how you contribute to the process.”