More specifically, who are you to the U.S. government?

You have a legal name, a tax ID, and a Social Security or immigration number. You might also have a voter registration, a driver’s license, a passport, a government employment card.

Each of these identifiers is discrete. Your tax ID doesn’t talk to your driver’s license. You can’t use your Social Security number to operate a car. Most of us keep track of these diverse, disconnected items without much thought. But is there a simpler way?

If you ask the Republic of Estonia: Yes.

The European country has — since regaining its independence in 1991 — established itself as a leader in digital services. The Atlantic called it, “the world’s most tech-savvy government.” Last week, a group of Estonia’s most prominent technologists visited D.C. for a week-long tour, which included meetings with the State Department, the World Bank, and U.S. digital services teams. 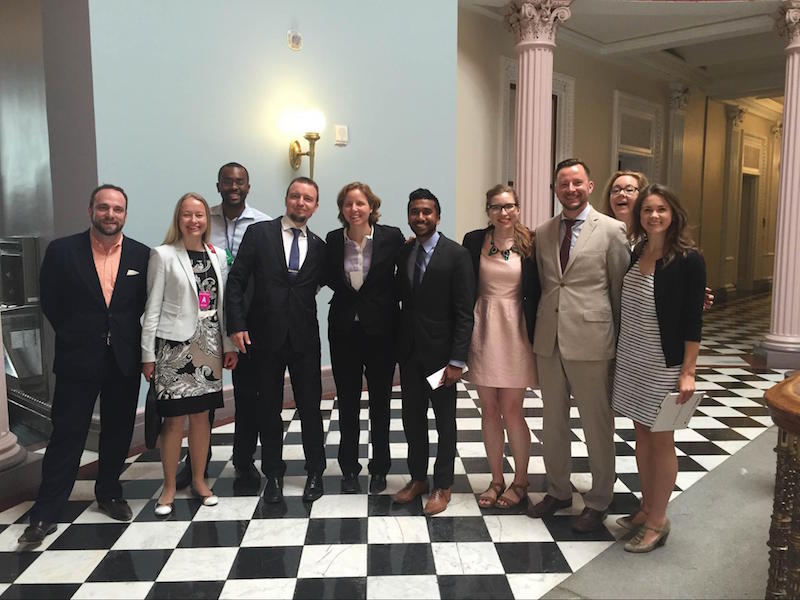 At 18F, we were thrilled to meet for a discussion on digital services, cyber security, and IT funding — a talk that, coincidentally, came on the heels of a massive U.S. security breach, which compromised the information of about 4 million federal employees.

“It’s quite a unique system we have,” said Liina Areng, the agency’s head of international relations, underscoring the significance of builders and funders combined into one agency.

“We have lost the ability to go back to paper,” said Andres Kütt, chief architect of Estonia’s Information System Authority. “We don’t have physical rooms to store the paper.”

Storage space is an issue that crops up in the the Baltic nation, comprised of a mainland and 1,500 islands and islets. The total geography is 17,000 square miles. By comparison, the U.S. is 3.8 million.

At last week’s meeting, both the U.S. and Estonian representatives took turns mapping their country’s digital infrastructure. Estonia: three, multi-layered silos with customer satisfaction on the top. The U.S.: a spoke-hub approach. Both teams spoke frankly about the challenges they face. U.S. representatives expressed a desire to spread federal innovations on a state level. Kütt said it had been difficult, at first, to show agencies he could administer technology without unfairly dictating to them.

A passerby might have mistaken the group for a cohort of old friends. Conversation was easy and laughter regular. It was interesting to see the similarity of challenges faced by the U.S. and Estonia, said John Yuda, an 18F senior product design advisor who attended the meeting.

“We see the same thing in our work: So much of what we do is about building trust relationships with both our users and partner agencies,” Yuda said. “When we’ve been successful, it is by using persuasion and indirect influence.”

At one point, Kütt shared a story he heard at MIT. An architect’s work is like trying to move a horse by blowing on its tail, he said.

“If you do it just right, the horse is going to move.”