Since mid-2016 we’ve profiled members across the Technology Transformation Service (TTS) team. Mark Hopson joined 18F last January after working as a Contracting Officer at the Census Bureau. He works for the TTS Office of Acquisitions on Agile BPA call orders, procurement strategy, and other projects that are helping advance the way that government buys technology. 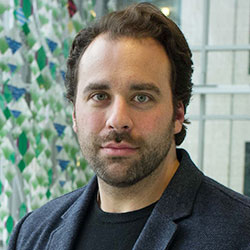 Jeannine Hunter: What is your role at TTS? How would you describe it to someone who doesn’t work in the government?

Mark Hopson: I’m a contracting lead here at TTS, so I work with agency partners and other project teams whenever they are involved in the acquisition process. Essentially, I’m a personal shopper for the government. It’s my job to design and ensure a fair, transparent, and competitive process whenever the government spends taxpayer money to buy anything necessary for accomplishing its various missions. It’s very complex in practice, but it’s basically negotiation on America’s behalf. I love getting the taxpayer the best deal possible and saving money, because that’s one of the best ways to spur true innovation.

JH: Can you share a little bit about your previous work, education and training experience before 18F/TTS?

MH: I have a great range of interests, which means that I had quite a bizarre educational journey that included a brief stint at art school. I discovered that I was very much drawn to human conflict having volunteered throughout high school at a community mediation center. My experiences there really stuck with me through that bizarre journey. So, ultimately, I graduated summa cum laude with a dual major of History and Conflict Analysis and Dispute Resolution. After that I went on to get my law degree. Basically, all of my formal education focused on international and environmental conflicts, which I focused on during my law school coursework as well, including a semester in South Africa.

Throughout school, between classes or my clinical duties, I was working as a jack-of-all trades from training, facilitating, intake, etc. My greatest enjoyment came as a mediator because I truly loved being able to take parties who were at total odds at the start to successfully helping them resolve their own conflicts and generate lasting agreements. I’ve done around 100 cases by now.

Because of its size, TTS really feels like I have returned to the world of small non-profit organizations. I joined the federal workforce after someone recommended that, as a lawyer who likes reaching consensus through alternative methods like mediation rather than litigation, I should really check out government contracting. I didn’t really know what to expect, but I certainly was not disappointed. I’m helping people develop and reach productive agreements every single day, almost with every single conversation.

MH: I really love working for the federal government because it’s the only place that has so many amazing missions and equally amazing people dedicated towards ensuring success. I actually got to know 18F from working with them at my prior agency. Even though a lot of folks in TTS and 18F are new to government, they all have that same kind of spirit, patriotism, and motivation, which made it easy to transition from my prior agency. When the chance to join 18F arose, I leapt at it for both the challenge working across a broad range of missions in government and the opportunity to work with these truly amazing folks.

JH: What specialties do you bring to TTS?

MH: Even though I’ve been an operational contracting officer for five years now, the skills, methods, and processes that I used in the conflict resolution field haven’t really changed. My two main specialties are alternative dispute resolution and procurement, both of which have the similar foundations and influences.

JH: Share a little bit about how you view the projects you work on.

MH: So far, everything I’ve experienced and seen with our agency partners demonstrates that the “solution” is in the “problem.” To that end, we’re not coming in to “rescue” anyone. I really enjoy how open and welcoming our agency partners have been so far. Everyone seems to really love the opportunity to explore a thorny challenge in different ways and fostering the type of conversations and generate options that may not have existed. For example, the Agile BPA is a great place for us to purposefully experiment with procedures and methods that can be applied to the acquisition space writ large. I’ve personally learned some things that will be shared on our blog that folks can implement right now when it comes to adapting the FAR to support agile development rather than waterfall. There’s also some amazing opportunities around the migration to cloud computing across the entire federal government, both civilian and defense, and it’s one of my areas of passion to demystify and simplify the acquisition process for buying it while complying with the FAR.

JH: What excites you about the future of TTS?

MH: The thing that excites me most about the future of TTS is the amazing group of people that I get to work with every day. This includes not just my immediate co-workers but our agency partners as well. I get energy and excitement from their missions more so than our own, and I have gotten to see a broad spectrum of highly-dedicated civil servants, and contractors, try to further their missions, and by extension, better serve the American public.

“The best way to build big is to start small”