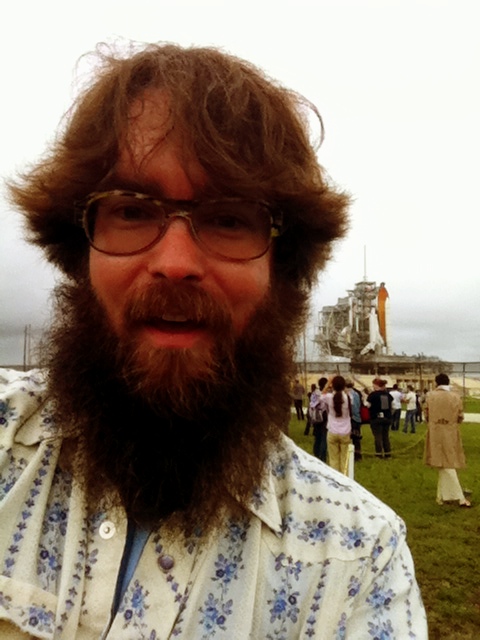 "When my time at 18F is done, I’m looking forward to taking with me the experience of what can be achieved by a team with extraordinary skills, diverse backgrounds, and a shared patriotism."

All throughout the summer, we’ll be profiling members across the 18F team. Mark Trammell joined 18F in May 2016 after stints at Twitter, Sonos, Digg, Paypal, and Obama for America. He currently works on CALC, a tool that helps the federal contracting community make faster, smarter buying decisions.

Melody Kramer: Tell me about your path to 18F.

Mark Trammell: I grew up in Florida, and my dad was in the Coast Guard reserves. During shuttle launches at Cape Canaveral, sometimes I would get to go out with him on the Coast Guard cutters, which was amazing.

I joined the Navy out of high school. I started as an electrician and then worked in the USS John F. Kennedy public affairs shop. I built its first website in 1996 after talking with some of the people in the fleet postal service about about how long it took for sailors at sea to correspond with family members.

Letters had to be sent from the U.S. post office to the fleet post office to a ship to possibly a smaller ship to get to a sailor. Then, the sailor had to read it, write a response, and the letter had to go all of the way back. The content of those letters was often mundane and general because sailors couldn’t talk about their ship’s movement, so they could say things like, ‘We went to this port city,” but most of the notes were more like “I’m doing fine.” The idea was to get general information back to family members that could be distributed quickly. This was in 1995-1996, and I thought “This new World Wide Web thing looks interesting,” and I bought “How to build your first website in 24 hours” and a giant 486 laptop to take on the ship with me.

That’s how I got started doing this stuff. Since then, I’ve worked at the University of Florida, Paypal, Obama for America, Digg, Twitter, and Sonos. I’ll talk about my time at Twitter and Digg, because it’s similar to what I do at 18F.

At Twitter, I led design research. We were studying how people were connecting with each other around events or topics they care about and how they keep up with the diverse set of things they care about. We used that knowledge to help people build a more diverse and engaging set of accounts to follow and interact with.

At Digg, I had a similar role. We allowed people to vote on what they thought was interesting or newsworthy, which was a novel idea at the time. Turns out the acts of voting up or down — taking a positive action vs. a negative action — are very different, and they’re not solely oppositional. Understanding how to best handle one action over the other was a lot of the work that we did.

MK: How did you find out about 18F, and why did you join?

MT: After working at Twitter, I worked on President Obama’s 2012 campaign, and after that wrapped up, I was pretty burnt out.

I moved to Santa Barbara, started designing speakers and wearing shorts to work every day to get my groove back. It took a while. I found out about the Presidential Innovation Fellows program in 2013 from 18F Deputy Executive Director Hillary Hartley. At the time, I was completely burnt out and tired, and knew I need more time to relax.

Fast-forward 18 months. We start chatting again and the more I learned about 18F, the more the set of challenges that it’s tackling intrigued me. Be it the way that it’s trying to help government work more nimbly, the set of projects that it has been fortunate enough to work on, the breadth of those challenges, or the impact of the solutions that it has been able to help produce….all of those together were exciting.

For my entire career, I’ve gone in and out of public service. I wanted to be a part of 18F changing the way the federal government develops online services and the individual projects 18F designs.

MK: What have you worked on so far?

We’re now working on getting more data into CALC. How can you get the broader set of information about how much the federal government is paying for services into a tool that everyone can use?

I’ve been thinking a lot about how I’ve handled past projects. In the process of understanding the projects I’ve worked on, I’ve always realized after conducting user research that the solution I initially had in my head to unlock the potential of the product was completely wrong, and even the potential for the product was different than I thought it was. The real joy for any product is unlocking that true potential, not just the assumed potential which motivated you to start the project in the first place.

MK: What was most surprising to you about joining 18F?

MT: I’ve been pleasantly surprised by how well working distributedly works at 18F. I’ve worked at places where they have had people who work distributedly, but the distributed-first approach that 18F takes, especially in team building, is really great and unexpected. To say that the team is distributed so it has to work that way has worked really well.

MK: You’re relatively new to 18F but eventually your term will end and you’ll likely move onto to other things. What do you hope to take with you?

MT: That shared purpose is such a special thing. 18F is not just people who are good at their job. It’s that they have not just an individual but a joint drive to improve the lives of the American populace, and that sort of shared understanding of purpose is not something that you see often — or, to this extent, maybe ever — anywhere else. When my time at 18F is done, I’m looking forward to taking with me the experience of what can be achieved by a team with extraordinary skills, diverse backgrounds, and a shared patriotism.