Last year, we worked with the Department of the Interior to launch the website for Every Kid in a Park, a program that gives U.S. fourth graders free access to all federal lands and waters — including national parks, forests, wildlife refuges, and marine sanctuaries — for a full year. (They can also bring their families with them for free.)

The website everykidinapark.gov was designed, developed, and written for 10-year-olds. The site includes a comprehensive list of sites, explains how the program works, and shows how to print a pass.

One fourth grade class in Monticello, Illinois took the Every Kid in the Park idea even further. They used the website to learn more about National Parks and create a culminating project for their school’s annual open house.

We reached out to Washington Elementary fourth grade teacher Robyn Garrett, who led the project, to learn more about how she used national parks and Every Kid in a Park in her curriculum.

Melody Kramer: Robyn, tell me a little bit about the end of the year project you created with your class.

Robyn Garrett: Each year, I create a culminating project for our school’s end-of-the-year open house. The goal is to make history real to our fourth graders and to let them know it is still all around them.

This year we utilized the National Park Service website and Every Kid In a Park. We used the sites to research and connect our study of early American history and the impact our geography had on the decisions made by Native Americans and Early settlers.

Each student selected a state at the beginning of the year to build a background for their final projects. The final project required them to build a structure to be created depicting a National Monument in their chosen state. The monument needed to include four lights wired to a switch to fulfill their science component. They had to write a paper that explained the historical significance of the monument, which fulfilled their writing component. Finally, they each had to give an oral presentation on their monument to the class, which helped with their speaking and listening skills.

These projects were then displayed for our open house. 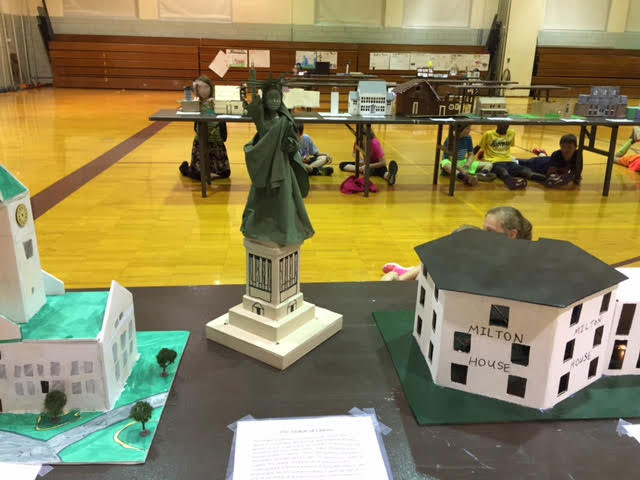 Monuments from National Park Service sites that were created by fourth graders in Monticello, IL.

MK: Could you share what students researched and learned for their presentations?

RG: In addition to researching a specific monument, each student also selected a National Park to research. They reported on the location, when the park was formed, and who the president was who designated it. The significance of the park was researched and written into a “commercial” with three slides of pictures of their selected park. These then played during our open house.

Lastly, students used the internet to find the distance from Monticello, IL to the National Park they researched. This information was recorded in miles and driving time on the large map marking each park we researched.

The students were amazed by the size of the protected land and the beautiful sites. We watched bits and pieces of the PBS program on the National Parks, which endeared them to President Theodore Roosevelt, President Franklin Roosevelt, and John Muir. In turn, they found pages of quotes on the websites which we included on another wall of the gym. 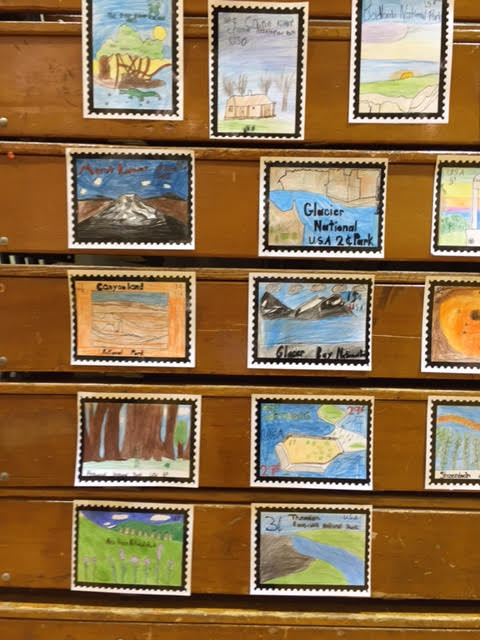 Students made stamps for their National Park, which hung in the school gymnasium.

MK: Did you use any lessons from the Every Kid in a Park website?

RG: We used the first three lessons (on exploring federal lands and water, environmental stewardship, and our nation’s Native people) from Every Kid in a Park’s educator section.

The most impactful was the lesson on stewardship. We went on a field trip to the local 4-H camp and our lunch discussion was about how being good stewards of the land could make a difference right here and now. That is what every teacher strives for — students connecting the classroom to the world around them. Students reflected on parks they had visited and many that they hope to visit. I believe this program had a huge impact on my students.

MK: Do you have a favorite park to visit?

RG: My favorite National Park is Canyon de Chelly. It is stunning and has a rich history that is difficult to understand unless shared by the people who live there. I was blessed to have had wonderful Navajo guides during my visits.

MK: Is there anything else you want to add?

RG: I will continue to incorporate these lessons into our studies. It is vital that our children understand the blessings of this great country and are impassioned to protect them.

The Every Kid in a Park initiative planted a seed with these students and their families. Thank you for making it such a positive part of my instruction.

“6 ways a writing lab will help your organization”

“When a micro-purchase doesn’t work out, we try to learn from it”