This past December, 18F launched a micro-purchase platform to enable vendors to place bids on opportunities to deliver open source code that costs $3,500 or less. This platform is a key part of 18F’s larger experiment around using the federal government’s micro-purchase authority to procure useful digital services from the broader vendor community. Below is a look at how and why we built this platform.

Testing a hypothesis with a minimum viable product 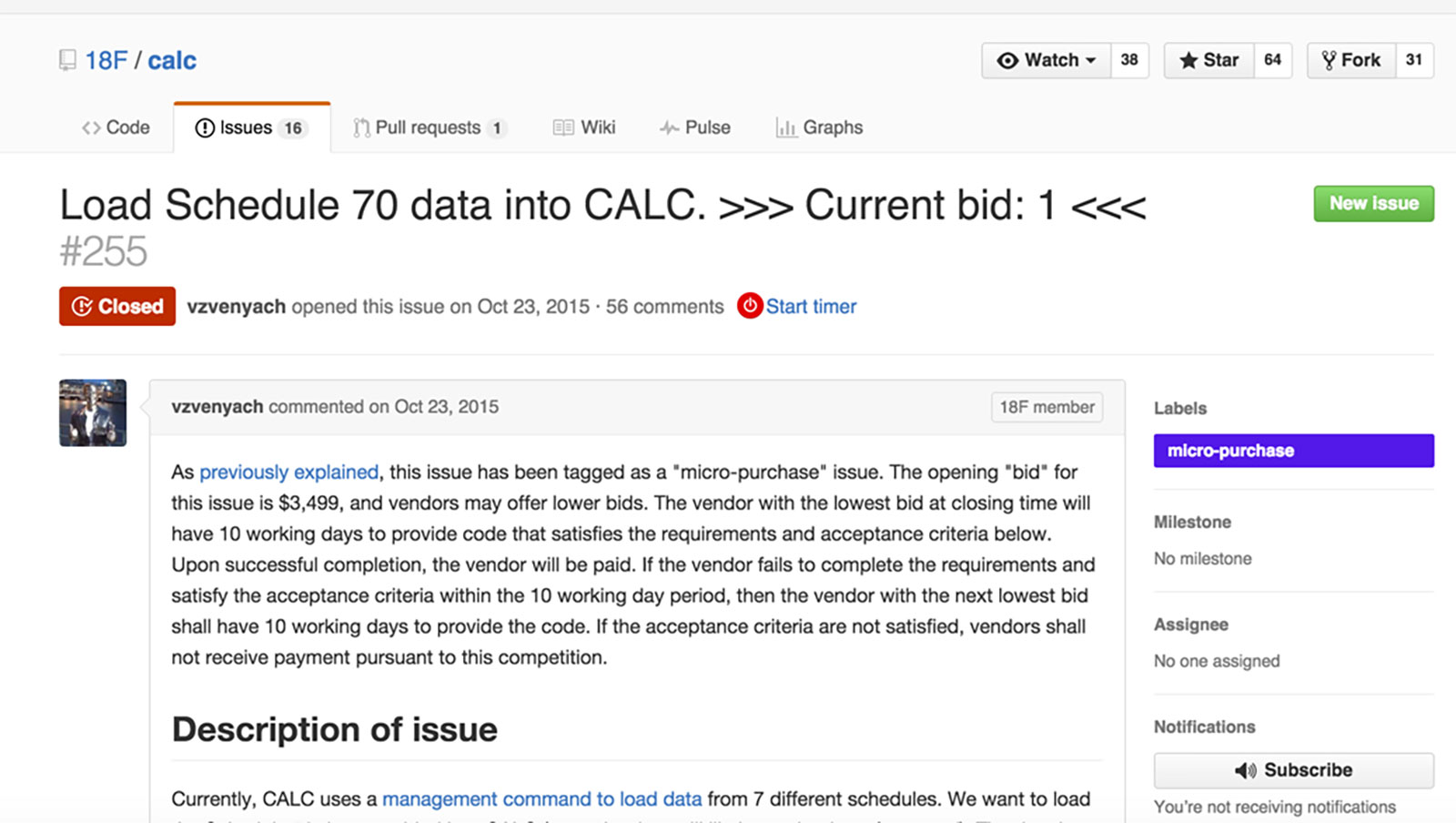 For the first micro-purchase auction, we launched a minimum viable product (MVP). We wanted to test the hypothesis that vendors would bid on very small opportunities and successfully deliver the requirements. If this hypothesis was false, we wouldn’t want to have sunk many hours into building a more complex platform that serves no purpose. To test the hypothesis, we built a web-based contraption consisting of Google Forms, GitHub Issues, and the GitHub API. Vendors placed bids in the Google Form, which populated a Google Spreadsheet. The spreadsheet triggered a Google Apps Script program that interacted with the GitHub API to update the title of a designated GitHub Issue. Several times during the bidding process, we needed to manually re-run the script as it did not always run when it needed to. The contraption worked good enough but was not something we would want to keep using. 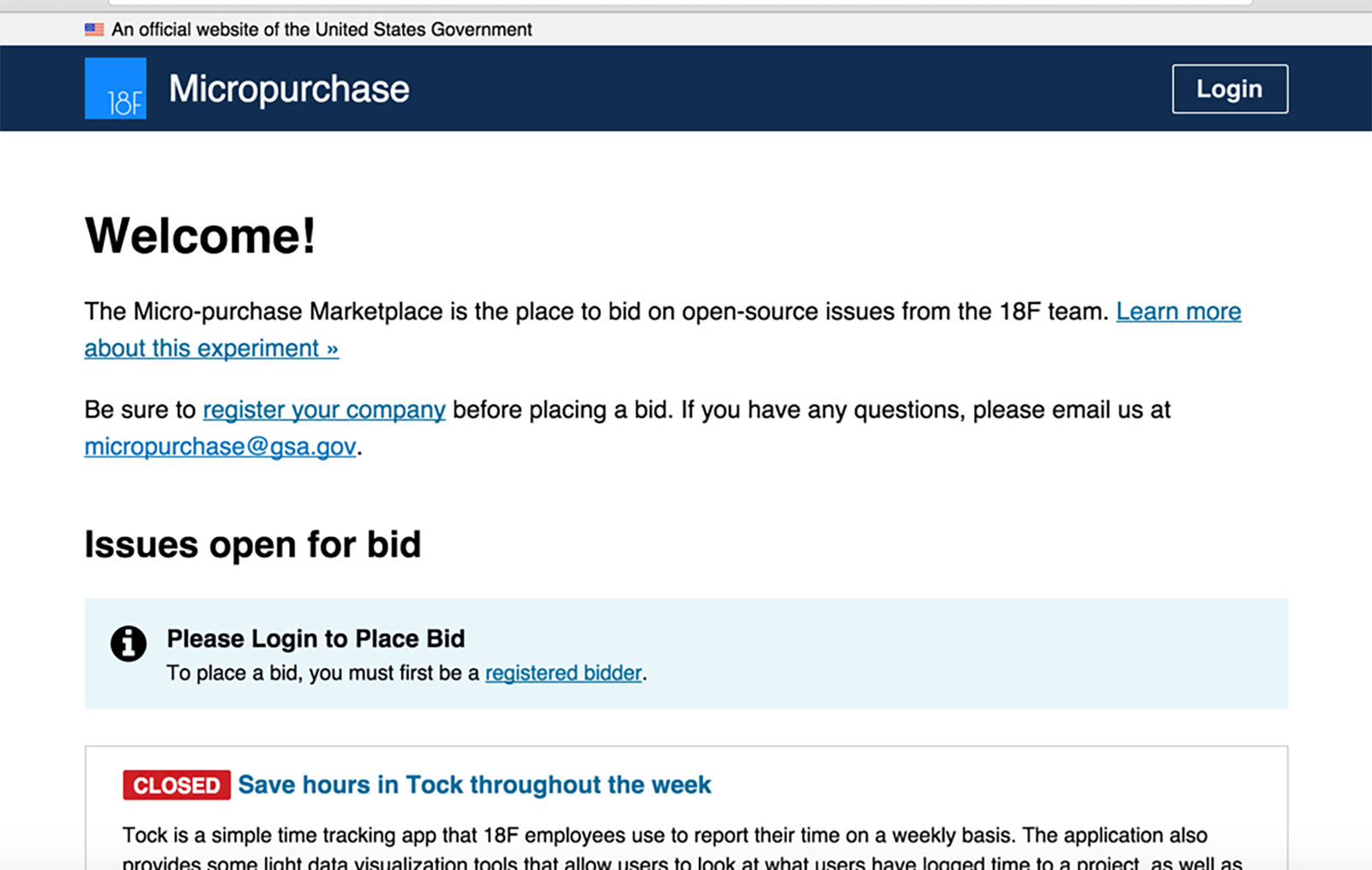 After the initial auction, our hypothesis was proven: many vendors placed bids, and the winning vendor successfully delivered the requirement. However, the Google Form MVP was not sustainable for future auctions. With this in mind, we set out to build a platform to enable easy open source micro-purchases. First and foremost, our goal for the platform was that it would be easy for vendors to participate. That meant that vendors would not have to waste time with long registration processes or get mired down in lengthy requirements documents. Second, we wanted the platform to make the administration of posting, receiving bids, and evaluating the vendor-delivered code to be a painless, scalable process for 18F staff.

As we said in our blog post introducing the micro-purchase experiment, one goal with this project is to “contract for [open source] contributions. And we want to do it the 18F way.” One aspect of contracting “the 18F way” is that systems should be built out of API-driven, modular components. The micro-purchase platform itself is no exception to this principle. In addition to a Rails application’s web interface, we built an API interface, as well as Ruby client libraries for the platform’s API and for the SAM.gov API, where vendors had to register before bidding on an auction.

The main codebase can be accessed at micropurchase.18f.gov and is available on GitHub. We chose Rails because it’s an open source, well-documented framework for rapidly building web applications. Also, we have a lot of in-house expertise in Ruby and some team members who knew how to keep a Rails apps clean while moving fast.

Because we require all participating vendors to have a DUNS number as part of a valid SAM.gov registration, we use the SAM.gov API to assist us with the administration of the micro-purchase platform. We built a separate Ruby gem, called Samwise, to access the SAM.gov API. Samwise, in turn, is used in a Rake task for verifying that DUNS numbers provided by vendors are registered in SAM.gov.

We also took a somewhat unorthodox approach to authentication for a government website. The micro-purchase platform only uses GitHub OAuth for authentication (for now, at least). We made this decision because vendors need to have a GitHub account in order to deliver the requirements of a micro-purchase via pull request. Since vendors would need to have a GitHub account anyway, we felt it would be onerous to require an account with an additional identity provider in order to participate.

Most of the site content can be seen without having to sign in. The home page has a list of current and expired auctions with details about bids. When you want to bid on an auction, you are prompted to sign in through GitHub.

Our team will continue this experiment, and we anticipate rolling out new auction methods in the coming weeks. This will include single-bid auctions as well as opportunities reserved for certain types of vendors (such as SBA 8(a) small businesses). We’ll also continue iterating on the platform and making it better for users and administrators, alike. The next set of auctions will launch at 1 p.m. EST on February 24, and we look forward to posting a larger variety of opportunities in the future!

“Software maintenance is an anti-pattern”