Posting images on Twitter increases potential retweets by about 35%, according to stats published by Twitter. But posting images on Twitter raises interesting questions for accessibility; namely, there’s no way to include alt-text in a Twitter image to capture what the image shows, which can be exclusionary for people with visual impairments or slow Internet connections.

We think a lot about accessibility at 18F. We want to make sure any images we post to Twitter are as accessible as the images we post to our website. Last week, we started trying something that we think will help make images in our tweets much more accessible. We started responding to our Tweets containing images, with another tweet explaining what the image shows. Here’s an example: 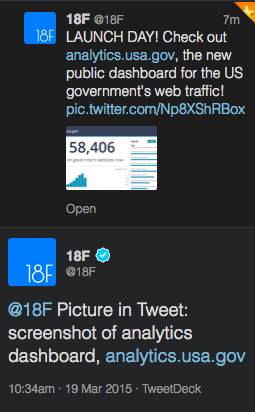 Feedback from our audience was positive, and several people offered even more helpful suggestions on how we could improve our initial strategy. @travelingheidi suggested also including a link to the original Tweet in the response Tweet, which is a great idea (and will improve accessibility even more).

@18F Would creating another account @18FImages to link + reply to tweets with descriptions be an option? It allows folks to turn it on/off.

And @thebenedict suggested creating an Inception-like experience for users, which is just funny and worth sharing:

Please let us know in this GitHub thread if you have a suggestion or feedback on this approach, because we’d love to continue the discussion.

Daniel Morgan wrote and suggested that we add this link to a DigitalGov toolkit called Improving the Accessibility of Social Media in Government. It’s a must-read if you’re interested in accessibility issues, and contains “helpful tips, real-life examples and best practices to ensure that your social media content is usable and accessible to all citizens, including those with disabilities.”

“One year in and looking forward”