Midas is an online platform that brings to life the vision of an “Innovation Toolkit” for government. It is a marketplace of skill building opportunities which matches people to projects that they’re passionate about. You can think of it as “kickstarter for people’s time.”

The concept of an Innovation Toolkit started as a Presidential Innovation Fellows project to give federal employees a place to work on innovative ideas across government that may occur outside their normal job or management chain. The Department of State’s Office of eDiplomacy teamed up with The White House Office of Science and Technology Policy to prototype a crowdsourced marketplace for innovation.

The history of Midas

To understand why the State Department was interested in such a project, first imagine that you’re an enthusiastic federal employee that has lots of ideas for government to better serve its people and businesses. One such group of feds is foreign service officers, especially junior foreign service officers who spend their first few years performing consular work. They are located around the world and typically process visas and passports full time. Foreign service officers are highly educated and trained individuals – often with advanced degrees and significant work experience. The question was posed: how can we leverage this untapped potential of the federal workforce to make meaningful progress on innovative projects? And how do we provide professional development opportunities to both local and remote workers that want to build their skills and advance in their career?

From June through December 2013, through the Presidential Innovation Fellows program, we conducted numerous user interviews and meetings with stakeholders at the State Department. We met with foreign service officers, supervisors, and country desk officers that coordinate activities in each region. From these interviews, tests, and prototypes came Midas – a marketplace for projects and opportunities. At State, they started calling it “crowdworking.” (The internal website at State is officially called “Crowdwork.”) 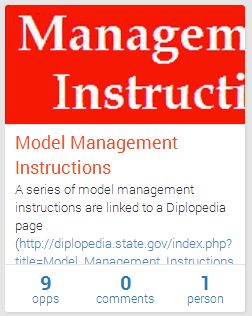 Midas consists of three main components — projects, opportunities, and profiles – all of which are connected through skills and topics of interest.

When employees sign up, they get a profile on Midas (which can be imported from existing services such as LinkedIn). Profiles contain a list of skills as well as topics that employees are interested in or passionate about.

Projects are a container that holds the discussions, events, files, and participants of a proposed activity. Projects also have skills and topics associated with them. This is where work can be coordinated. A project doesn’t have to be a project in the traditional sense; it can be a “tiger team”, a community of practice, or an interest group (for example, a group of people that get together to volunteer for a particular cause outside of work). 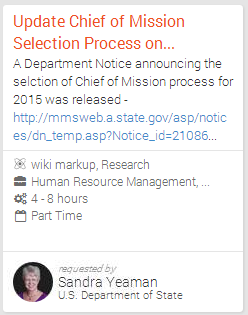 Opportunities are crowdsourced tasks that need volunteers. Opportunities are also associated with skills and topics. An opportunity can be part of a project, or a standalone need. These can be accomplished in as little as 15 minutes, or could be as consuming as a 6 or 12 month full time detail of the employee to another office.

Midas is currently being piloted by the Department of State [GitHub] and the Department of Health and Human Services [GitHub]. Midas is also a key component of the Office of Personnel Management’s GovConnect initiative, which is part of the President’s Second Term Management Agenda. Through GovConnect, agencies can experiment, prototype, and implement new workforce engagement programs, like Midas.

Crowdwork, the name of the Midas system at the Department of State, received the NextGen Exemplary Group Award. The award will be celebrated at the NextGen Training Summit on July 23, 2014 in Washington, D.C.

At 18F, we are now offering Midas to federal agencies as a Software as a Service. Any agency can test out Midas quickly, and focus on the programmatic aspect of “crowdworking” in their community rather than get bogged down in the details of acquiring and standing up the technology.

From day one, Midas has been available as open source on GitHub. It’s free for anyone to download, install, and use. All of our issues, features, and bugs are out in the open. Management of Midas uses agile methodologies and development is organized into sprints.

Come check out Midas for yourself on GitHub, and see how federal employees are working more organically, across traditional silos, and more collaboratively to improve government.

“Take a gander at our /Developer page”