In the last post, we talked about the potential consequences of having a lot of technical debt. Now, we’ll give you concrete steps to identify and then manage that technical debt so it doesn’t get out of hand.

To manage it effectively, you need to:

It’s easy to tell how much financial debt you’re in by looking at your various account statements (mortgage, credit cards, etc.). Technical debt, on the other hand, isn’t so obvious, which can make identifying it a challenge. Thankfully, there are a number of indicators (or warnings to look into something more deeply) that can help you and your developers recognize it.

After you’ve identified where the technical debt lives within your codebase, the next step is to make it visible to the entire team, including management, for decision-making purposes. The challenge here is to provide sufficient information about what work needs to be done, as well as associated costs, benefits, and risks, so that the team can make smart tradeoff decisions between fixing technical debt or building new features. Non-technical stakeholders tend to favor the latter, which can quickly lead to an out-of-control system. Here are three approaches to help overcome this bias.

The first approach is to factor technical debt into the cost of development, which yields a greater understanding of the value of paying it back or not paying it back. You can do this using our friend, the heat map, like the one shown below. 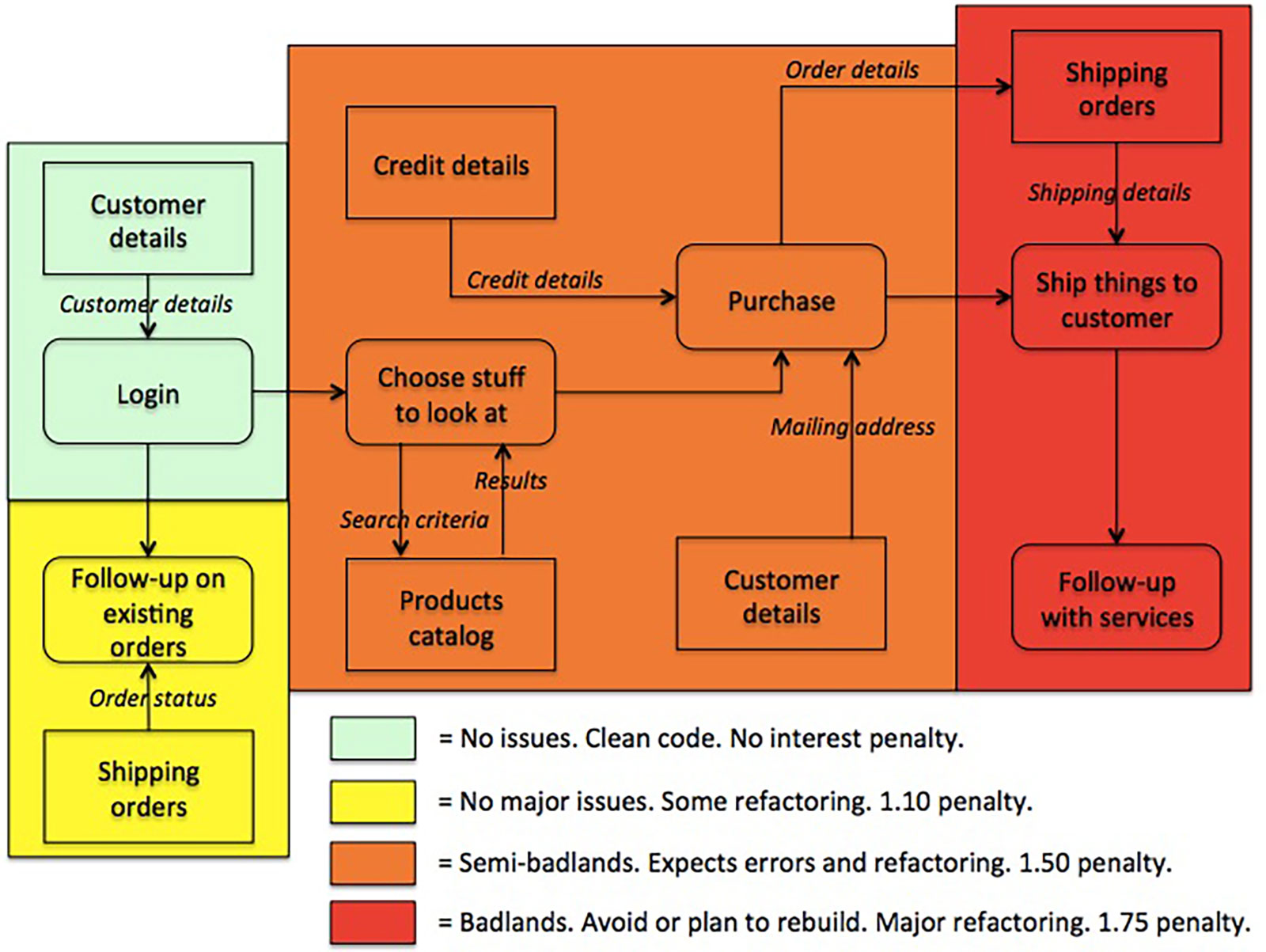 As you can see, each software component is colored to indicate the relative complexity in working with that section of the code. There’s also a numeric factor associated with each color. This represents the additional effort, or interest penalty, that a developer should factor in when estimating a task. For example, a change to a red-colored component originally estimated at four hours should be revised to seven hours (four hours multiplied by a factor of 1.75), or three hours worth of extra effort. This is an excellent way to shed light on what the interest penalties of carrying too much technical debt are.

The second approach is to maintain a technical backlog that defines technical work packages. Each package should convey the following pieces of information:

The third approach is to monetize technical debt using tools such as SonarQube. These tools calculate the cost to fix the technical debt accumulated in a product. For example, they might report $2 million of accrued debt in an application with 500 thousand lines of code, which would require spending $4 per line of code to pay back the debt. Not only can these tools report technical debt at a macro level, but also at a micro level. For example, detection of a specific block of duplicated code and the associated cost to fix it.

Regardless of which approach you use to make technical debt visible to decision makers, expressing the cost of it in quantitative terms (for example, dollars, labor hours, or story points) allows you to establish credit limits on how much debt the product can accrue. For example, when the technical debt reaches a certain level (for example 25 cents per line of code), all new functionality is put on hold until the debt is reduced to acceptable levels. This forces the product team to invest in controlling debt before things get out of hand.

Deciding what to do about technical debt

After you’ve made your technical debt visible for all to see, the next step is to decide what to do about it. Frank Buschmann describes three debt payment strategies:

As a general principle when deciding which payment strategy to use, you want to make sure that the important parts of your code are as clean as (economically) possible.

After deciding upon the payment strategy, the next step is to implement the fixes to your product. This requires fitting the work into your development cycles:

In our next post, we’ll go over ways to can prevent your next project from accruing technical debt in the first place.